Properly Fluffy Cinnamon Rolls that need only one quick rise and are so simple to make! They are made healthier by using no refined sugars or flours but taste anything but! These Perfect Fluffy Cinnamon Rolls have that classic chewy and just lightly sweet roll and are filled with coconut sugar and lots of cinnamon. Topped with a simple vegan frosting, that is made by hand and requires no whipping or beating, creating Cinnamon Rolls that are ooey gooey irresistible! They are just delicious and sure to make your house smell absolutely incredible. 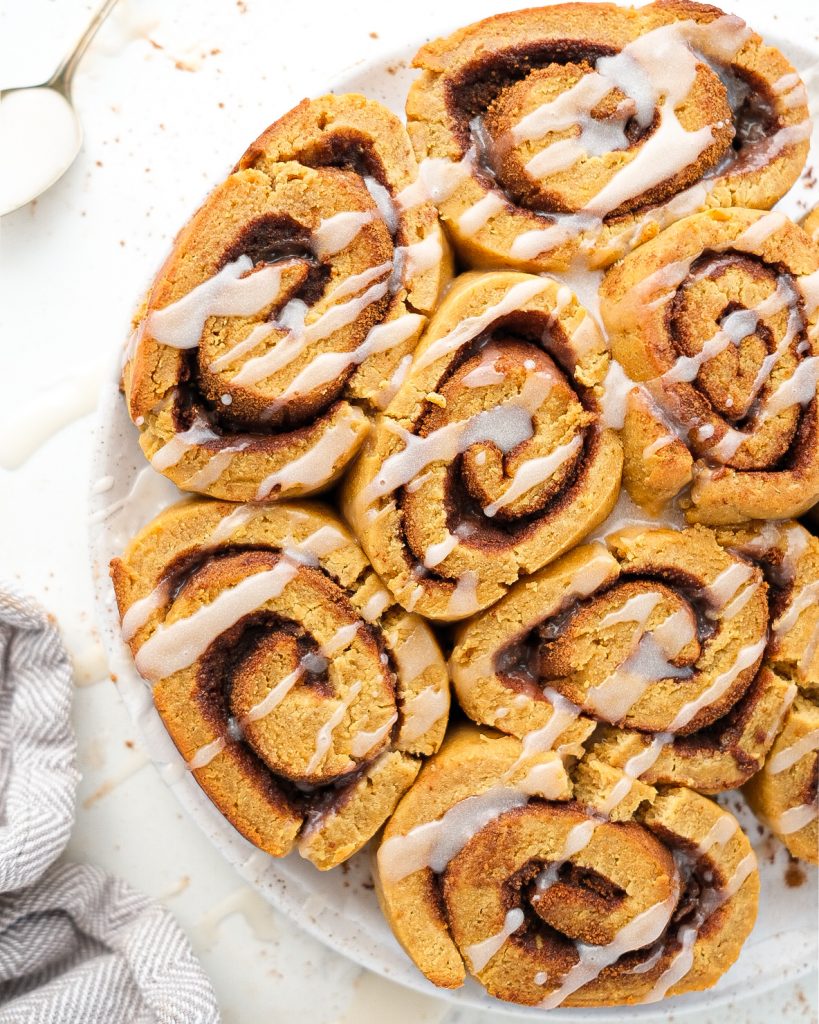 What Do These Perfectly Fluffy Cinnamon Rolls Taste Like?

These healthified Cinnamon Rolls taste almost exactly like a conventional Cinnamon Roll. More often than not gluten or grain free recipes for Cinnamon Rolls can turn out too dense or are basically just sugar cookies rolled up and baked like Cinnamon Rolls. These, though, have that classic Cinnamon Roll taste – a slightly dense and chewy, but still light and airy, roll with that properly fluffy “bready” texture Cinnamon Rolls should have. Filled with enticing swirls of cinnamon spiked coconut sugar to make them just perfectly sweet and very cinnamony. After they fluff up and bake, the roll are topped with a coconut-butter-based, dairy free frosting that is sweet and creamy to make for the perfect bite: layers of sweet soft roll, cinnamon sugar, and creamy frosting. These are everything you want from a homemade Cinnamon Roll but made better-for-you! And I don’t think I’m too bold in saying that these are pretty much your innermost breakfast dreams come true. 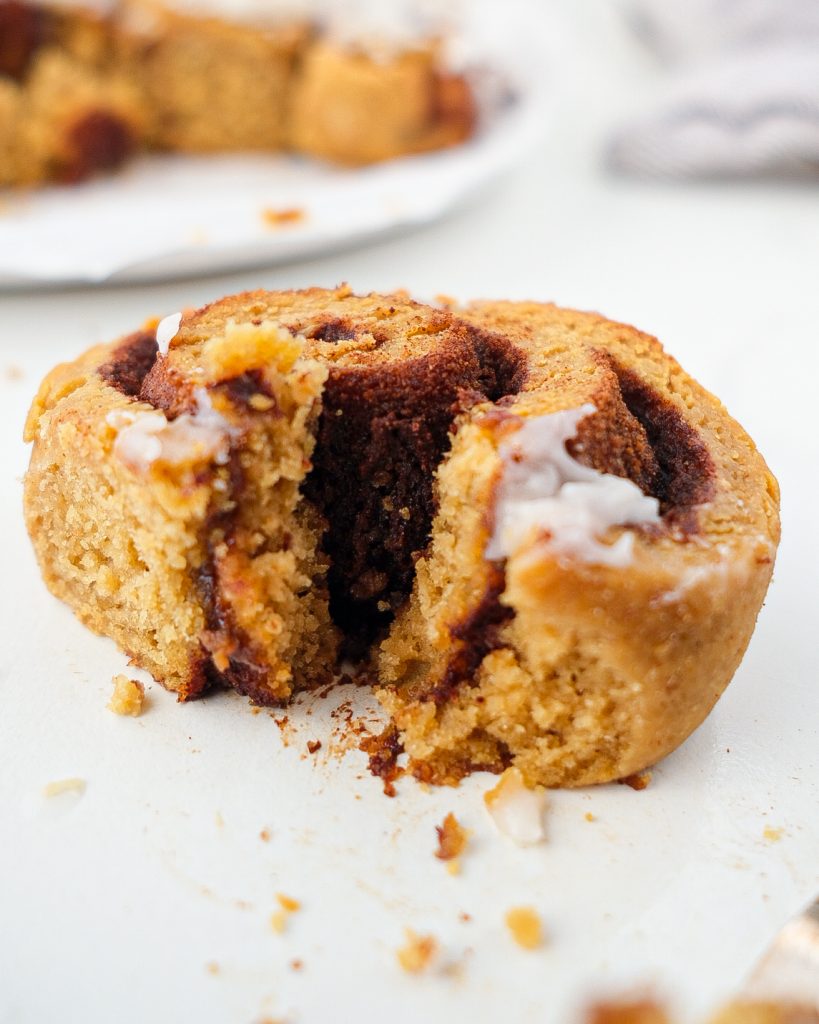 What Ingredients Are Used to Make These Healthy Cinnamon Rolls?

These Cinnamon Rolls are made better-for-you as they are made with no refined sugar, flours, or oils. They are paleo-friendly meaning they are gluten, grain, and dairy free! Plus, they are nut-free! Using only 14 (total) simple, real ingredients to make the dough, filling, AND frosting!

Here’s a look at the ingredients used and some substitutions and variations: 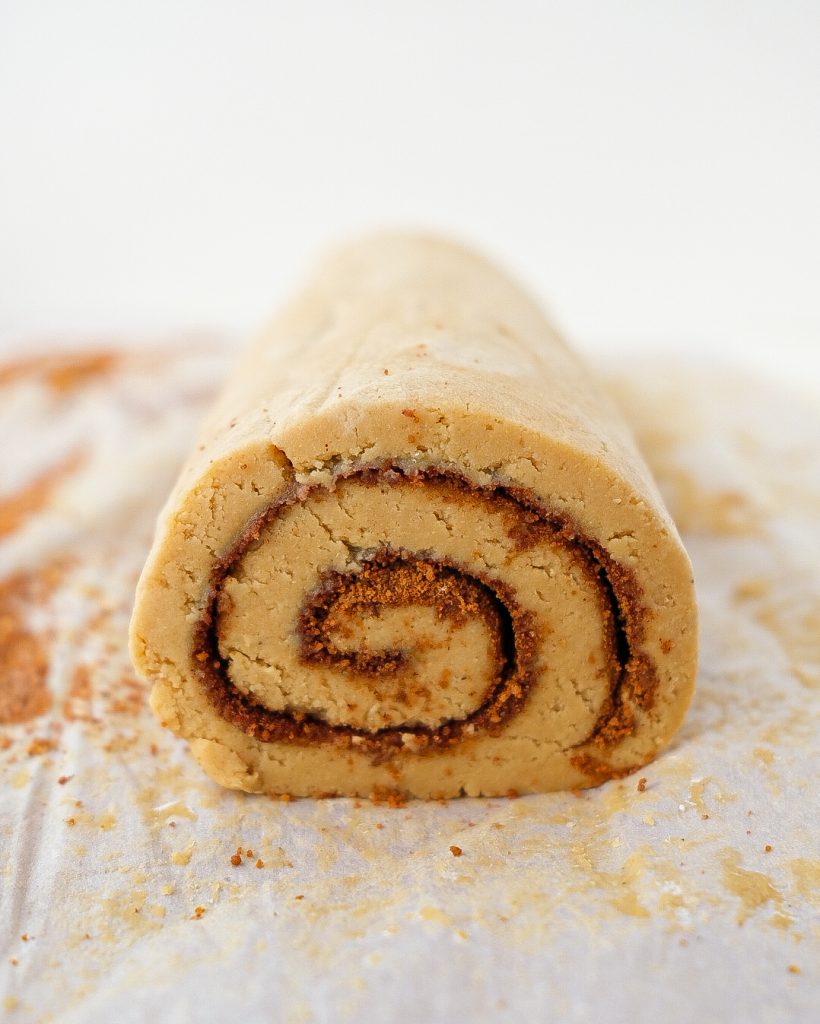 How Do You Make Easy and Fluffy Cinnamon Rolls?

These cinnamon rolls are surprisingly easy to make! The dough is made in just one bowl, they only need one, quick, rise and are easy to roll up! Don’t let the seemingly long recipe instruction list deter you! These are simple enough to make, I just go into a little detail on a few steps to ensure your success! Check out the step-by-step images below!

Here’s a look at the steps:

As with most cinnamon rolls, these are best when enjoyed just warm out of the oven and freshly frosted. If enjoying later on, reheat quickly to help re-soften the rolls.

These can be prepared a day in advance all the way to the rise. After they have risen, cover them tightly and store in the fridge. When ready to bake, let them come to room temp while the oven heats and bake normally. 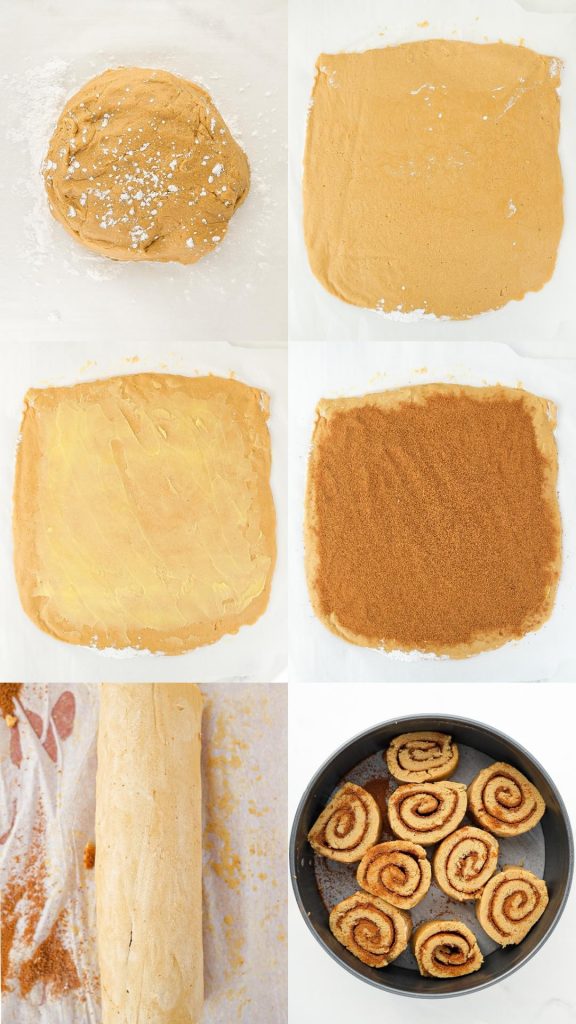 How To Make Homemade Powdered Sugar

I always make my own powdered sugar because I don’t use it often and hate committing to a full bag. This is totally not necessary, feel free to use any pre-made powdered sugar you like! However, making your own is cheaper and gives you the freedom to use whatever sugar best suits you! To make your own powdered sugar, simply blend the granulated sugar in a high powered blender or food processor until it becomes a fine powder. This only takes about 10-15 seconds or so. Just be sure that your machine is super dry beforehand. You will need slightly less granular sugar for the amount of powdered sugar called for in the recipe. For example, I used 6 tablespoons of organic cane sugar to get 1/2 cup (8 tbsps) of powdered cane sugar.

Variations: Use Lakanto powdered sugar to reduce the sugar content. Coconut sugar to make this strictly paleo and refined sugar free. Or use cane sugar which is a less refined version of regular white sugar. I preferred the cane sugar over the coconut sugar as it kept the frosting white and gives a nice flavor contrast between the dough/filling and the frosting. 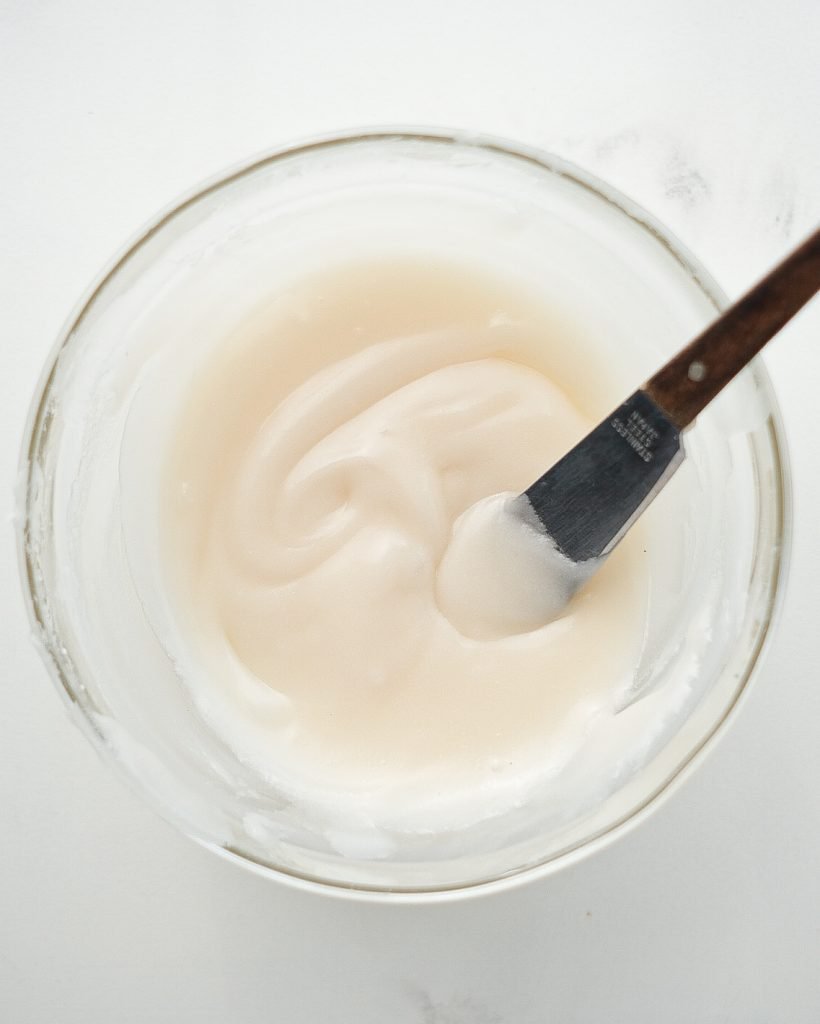 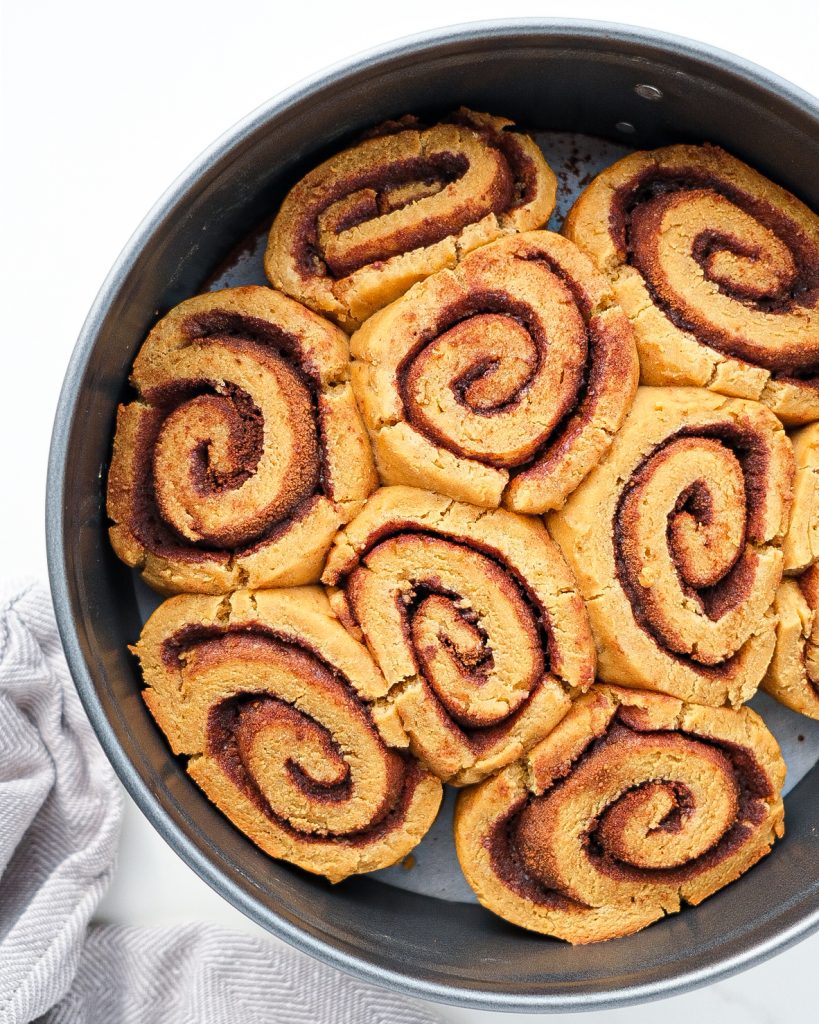 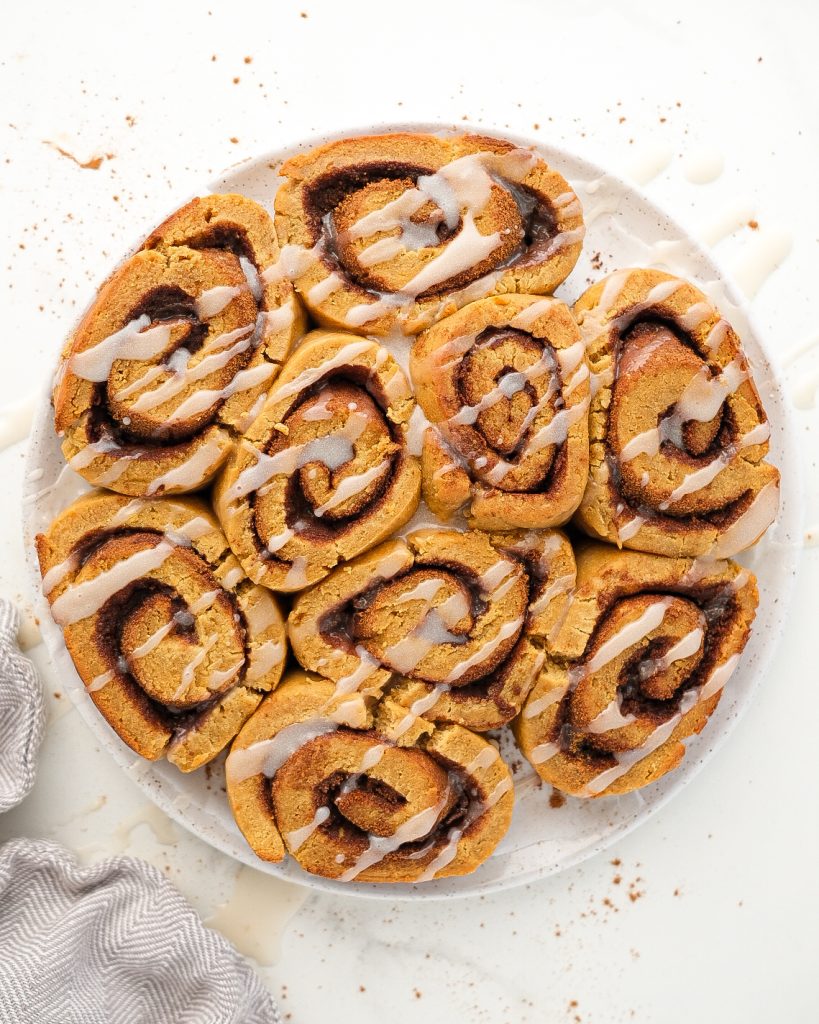 These Cinnamon Rolls are the perfect, healthier treat for breakfast or brunch. They are so fluffy, sweet and cinnamony, and simply irresistible. And as they are made better-for-you but still so delicious you’re sure to think you’re possibly still dreaming. I can’t wait for you to try them and I’m sure your friends and loved ones will be thankful too.

If you made this recipe, please spread the love by leaving a review or rating down below. And I’d LOVE to see and share your creation! Take a picture and tag me on Instagram @freshlydafna in your feed or stories and I will share on my socials!

Incredibly delicious Cinnamon Rolls that are properly fluffy while being better-for-you! Soft and chewy, fluffy rolls packed with a very cinnamony filling and topped with a delicious creamy frosting. These are simple enough to make and require only 1 short rise. Basically, the perfect breakfast or brunch!

Serving: As with most cinnamon rolls, these are best when enjoyed just warm out of the oven and freshly frosted. If enjoying later on, reheat quickly to help re-soften the rolls.

Make Ahead: These can prepared a day in advance all the way up to the rise. After they have risen, cover them tightly and store in the fridge. When ready to bake, let them come to room temp while the oven heats and bake normally.

Homemade Powdered Sugar: To make your own powdered sugar, select the granulated sugar that best suits you and simply blend it in a high powered blender or food processor until it becomes a fine powder. This only takes about 10-15 seconds or so. Just be sure that your machine is super dry beforehand. You will need slightly less granular sugar for the amount of powdered sugar called for in the recipe. About 6 tbsp to get 1/2 cup.

Ghee - Sub for melted and cooled coconut oil and use a pastry brush to brush all over the dough. Or use all ghee, subbing ghee for coconut oil in the dough.

Coconut Butter - Omit this entirely in the frosting and make a simple icing. This will require much less milk. Add milk in small splashes until it reaches desired thickness.

Freshly Dafna is on Pinterest! Save this recipe by pinning this image! 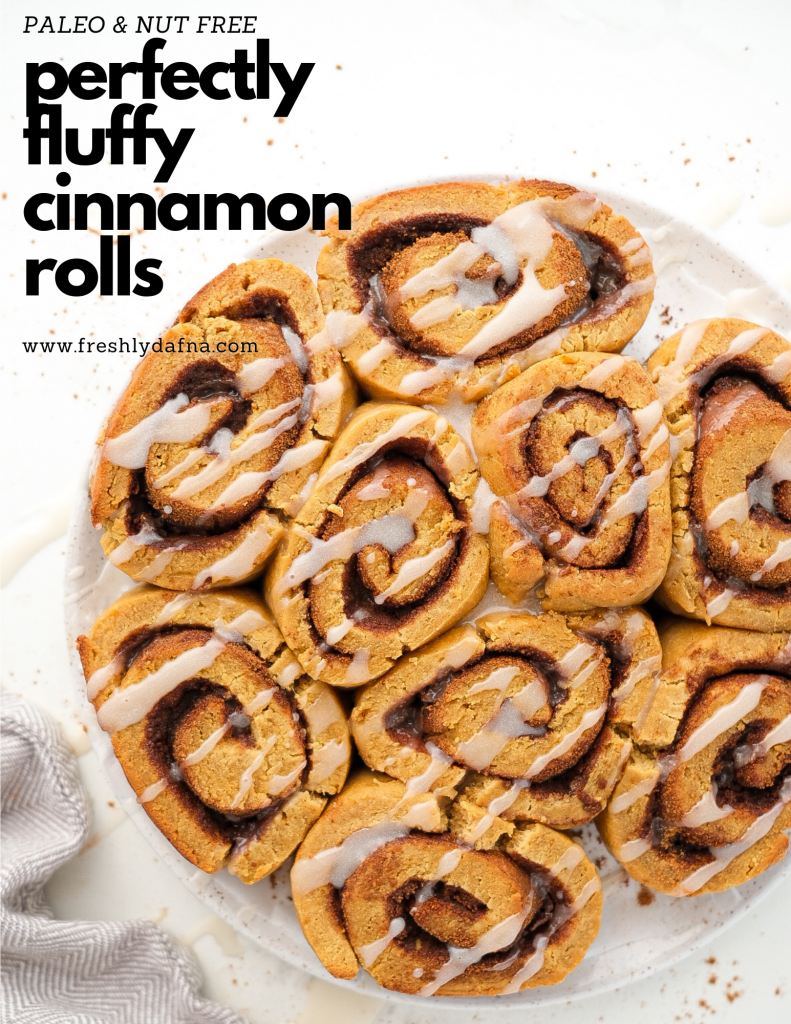 This post may contain affiliate links. Any product I include in a post is one that I’m currently using and loving. If you do choose to purchase these products, I may earn a commission, which helps support my site and the free content I provide.

Freshly Dafna
Hi there! I'm Dafna! I'm all about piles of veggies, healthified baking, breaking a sweat as often as possible, yoga, the beach, snacks, farmers markets, and dogs. And I'm so excited to share my recipes with you!Read more...

Never Miss a New post: Get Fresh recipes right to your inbox!

get the freshest recipes for all the
better-for-you treats delivered straight to your email
before it’s posted anywhere else!

enter your deets below:

(your info will never be sold or released, ever.)